Lions in Malawi; a roaring story

When you think of Africa, you think of the amazing wildlife. We write a series of blogs about animals that you could see on safari in Malawi. Today we tell you more about Africa’s largest cat; the lion. We share some interesting facts about this special animal, but also explain how the lions in Malawi are doing and where you should go to see them. 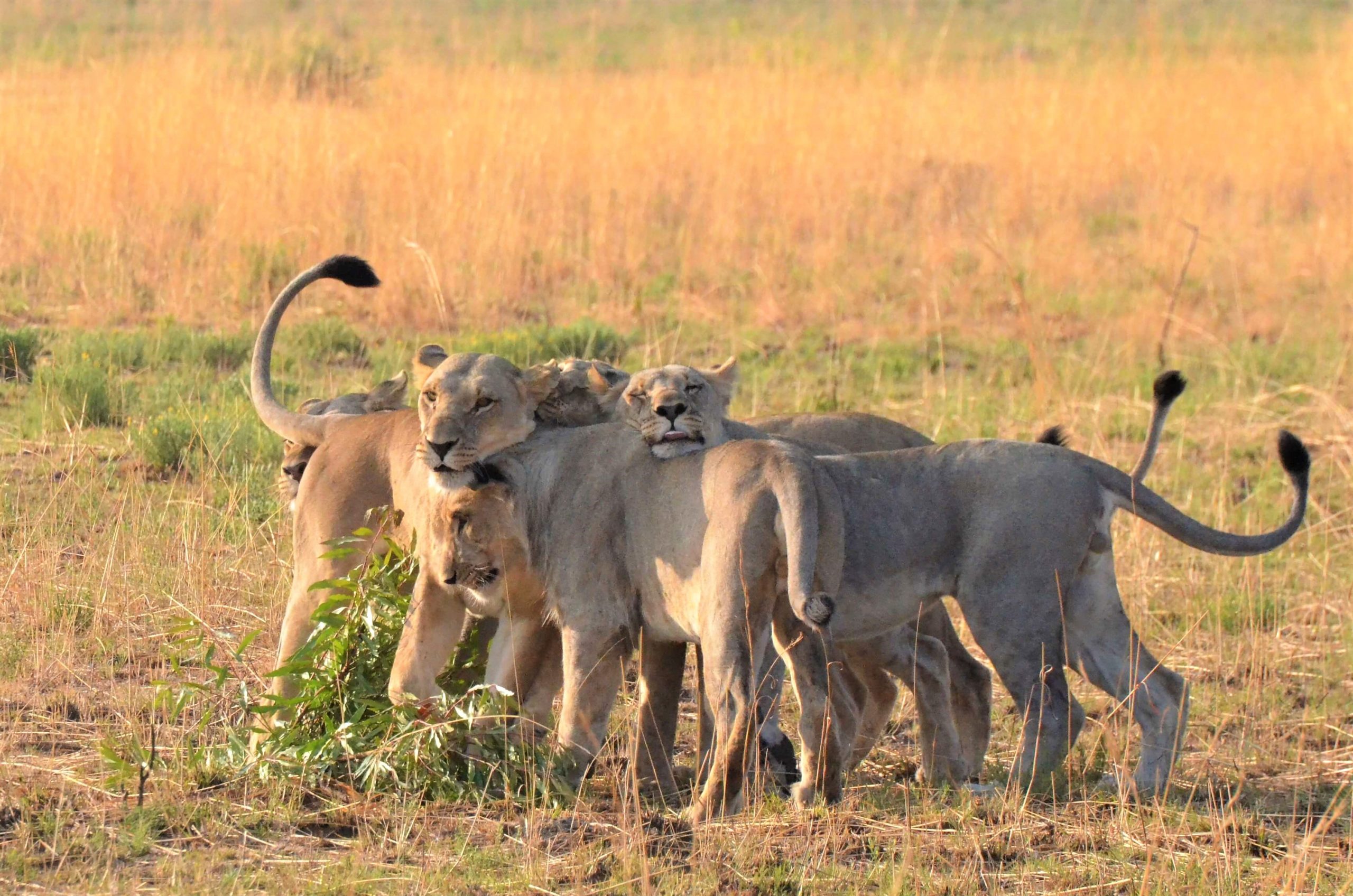 Lions live in family groups of between 2 – 40 individuals

The lion (Panthera leo) is the only feline in the world that lives in family groups. A male’s roar can be heard up to 8 km away, which often scares off the competition. If another lion thinks he has a chance to take over the territory anyway, it often results in a fierce fight. Usually the lionesses keep their distance, but sometimes they decide to defend their leader. They do this to protect their cubs. If a new male takes over the pride, he kills all cubs younger than a year. As a result, the lionesses get into their fertile cycle again, so that the dominant lion can immediately spread his own DNA. This creates problems in areas where there are too many males and therefor changes in leadership, because very few cubs will then reach adulthood. 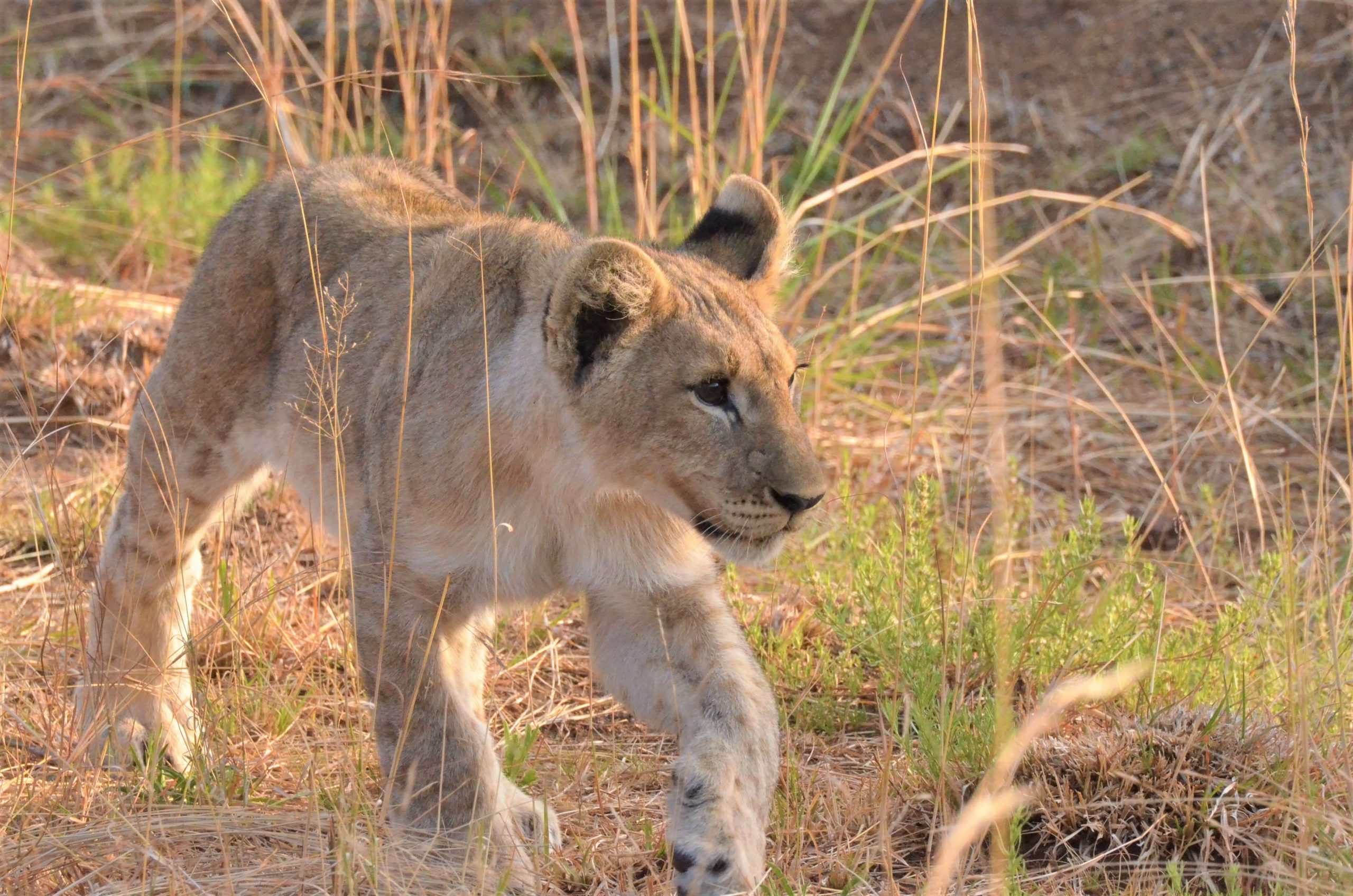 The lionesses are the hunters and know how to cooperate perfectly. The bigger the pride, the bigger the prey they catch. Wildebeests, zebras and buffaloes are favorites, but basically all animals should watch out for lions. For example, in Liwonde National Park we saw a pride of lions with a freshly caught warthog. This is more of a snack than a meal for them, but they won’t say no to a tasty piece of bacon! 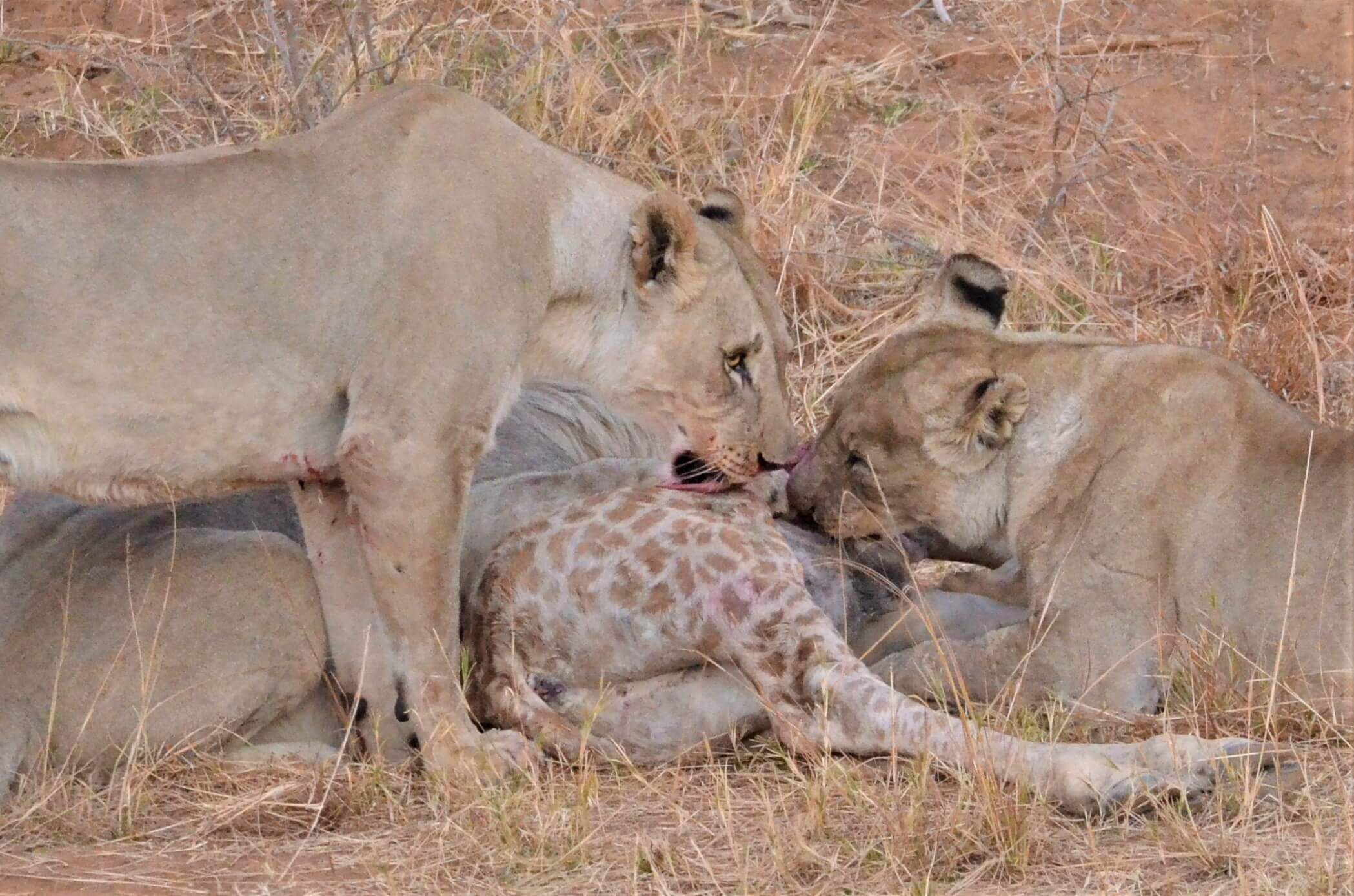 Although the Lion King doesn’t normally contribute to the hunt, he is the first to eat. While the ladies catching their breath after all the hard work, he picks the juiciest pieces for himself. He really gets the lion’s share… His only job is to protect his family and their territory and to make sure there will be many offspring. Mating is quite a job for lions, by the way. It happens about every half hour for three days in a row. We have heard from a guide in a bush camp that a pair of lions decided to do this exactly in front of their restaurant. So, everyone had to stay away for three days!

Lions sleep for about twenty hours a day, so if you’re lucky enough to find them, it’s often in this position. Especially after three days of mating!

Where in Malawi could you spot lions?

Lions do not care about national borders, so single males from the Luangwa Valley in Zambia are sometimes sighted in northwestern Malawi. In Kasungu National Park, for example, the rangers occasionally find tracks. In Vwaza Marsh Wildlife Reserve and Nyika National Park, lions are also seen or heard, although it has been a while back now. However, the most reliable evidence that they exist, comes from the studies conducted with motion cameras. The parks work together with organizations such as Lilongwe Wildlife Trust and Carnivore Research Malawi, to map out exactly which animal species occur in different areas. This knowledge is crucial to protect both nature and local communities. 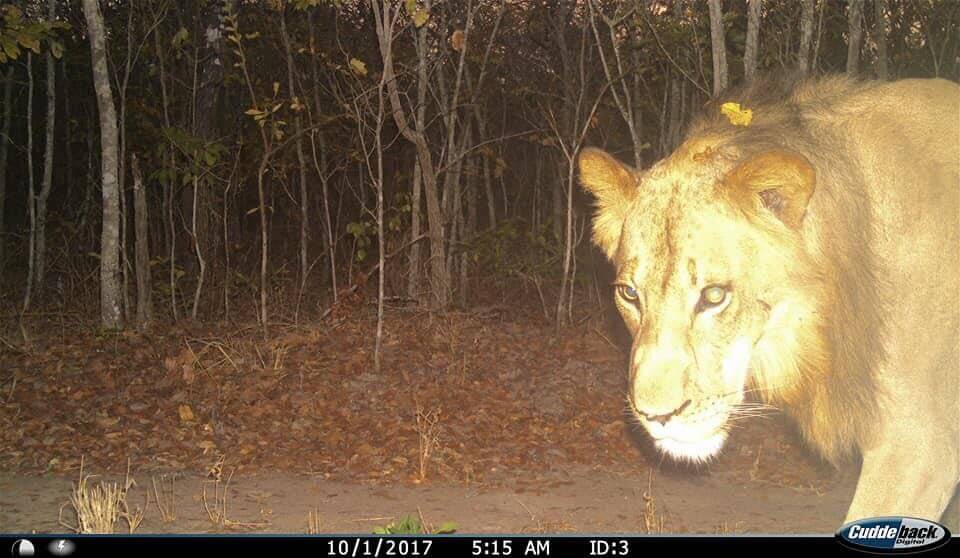 Lion on a camera trap in Kasungu National Park in 2017. Thanks to Brennan Peterson Wood – Carnivore Research Malawi

The best chance of seeing lions in Malawi is when you go on safari in Liwonde National Park or Majete Wildlife Reserve. Both parks are located in southern Malawi and are managed by the non-profit organization African Parks.

Before African Parks took over management of Majete Wildlife Reserve in 2003, most of the wildlife was gone. Only a few antelopes were left. The rest had either been poached or disappeared due to widespread illegal deforestation. By deploying and training more rangers and working closely with surrounding communities, African Parks was able to give nature a chance to recover. They sped up the process by reintroducing different animal species to Majete. Rhinos were welcomed back in the first year and elephants in 2006. After long planning, in 2012 the first four lions were also flown in. These came from the South African parks Pilanesberg and Madikwe. Anyone who already knew us in South Africa, knows how much we loved visiting the first one! 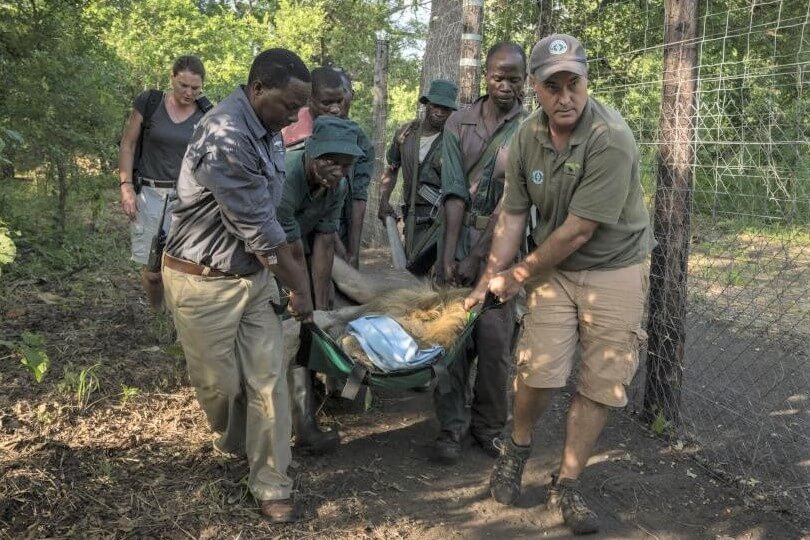 A grown lion can weigh around 200kg, so you’ll need quite a few people to move him around

Despite perfect constant guidance from a veterinarian and an ecologist, one of the lionesses unfortunately died of heart failure during the flight. Yet, it was a great success to have lions in Majete again for the first time in thirty years! The lion population in Majete grew, prompting the relocation of two male lions to Liwonde National Park in 2018. Liwonde’s story is similar to that of Majete. When African Parks also took over management here in 2015, similar conservation programs were set up. After the first two lions in 2018, a total of twelve additional lions were brought in from South Africa to boost the populations in both parks. 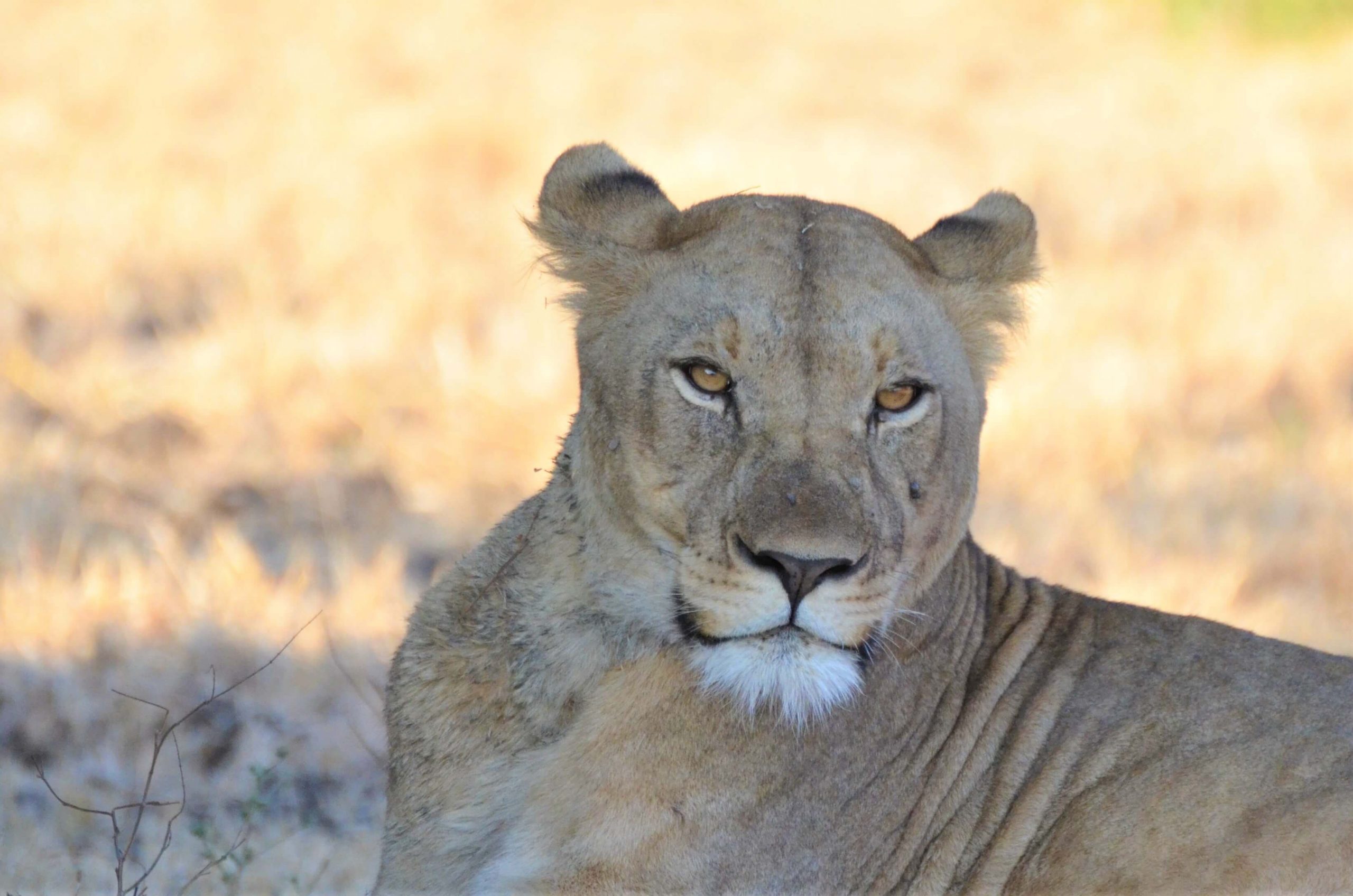 We saw this impressive lioness in Malawi’s Liwonde National Park

To better spread different bloodlines, it was decided to split up three lionesses who came from the same pride and were related to each other. Two went to Liwonde and the third to Majete, but unfortunately this lady did not agree. She broke out a number of times, probably looking for the other two. Eventually it was decided to take her to Liwonde as well, where they were reunited. Since then, this lioness has not made any new attempts to escape!

Do the lions in Malawi think they’re funny?

Cats will be cats. And lions enjoy some mischief too! The manager of Liwonde National Park, Andrea Reid, stays in the middle of the bush and regularly comes across all kinds of wildlife around the house. With mutual respect, this never really causes any problems. However, the lions only seem to come near the house when they’re feeling playful. They always look for the hose pipe and then tear it to pieces. It is quite a job to collect all pieces from the bush again! 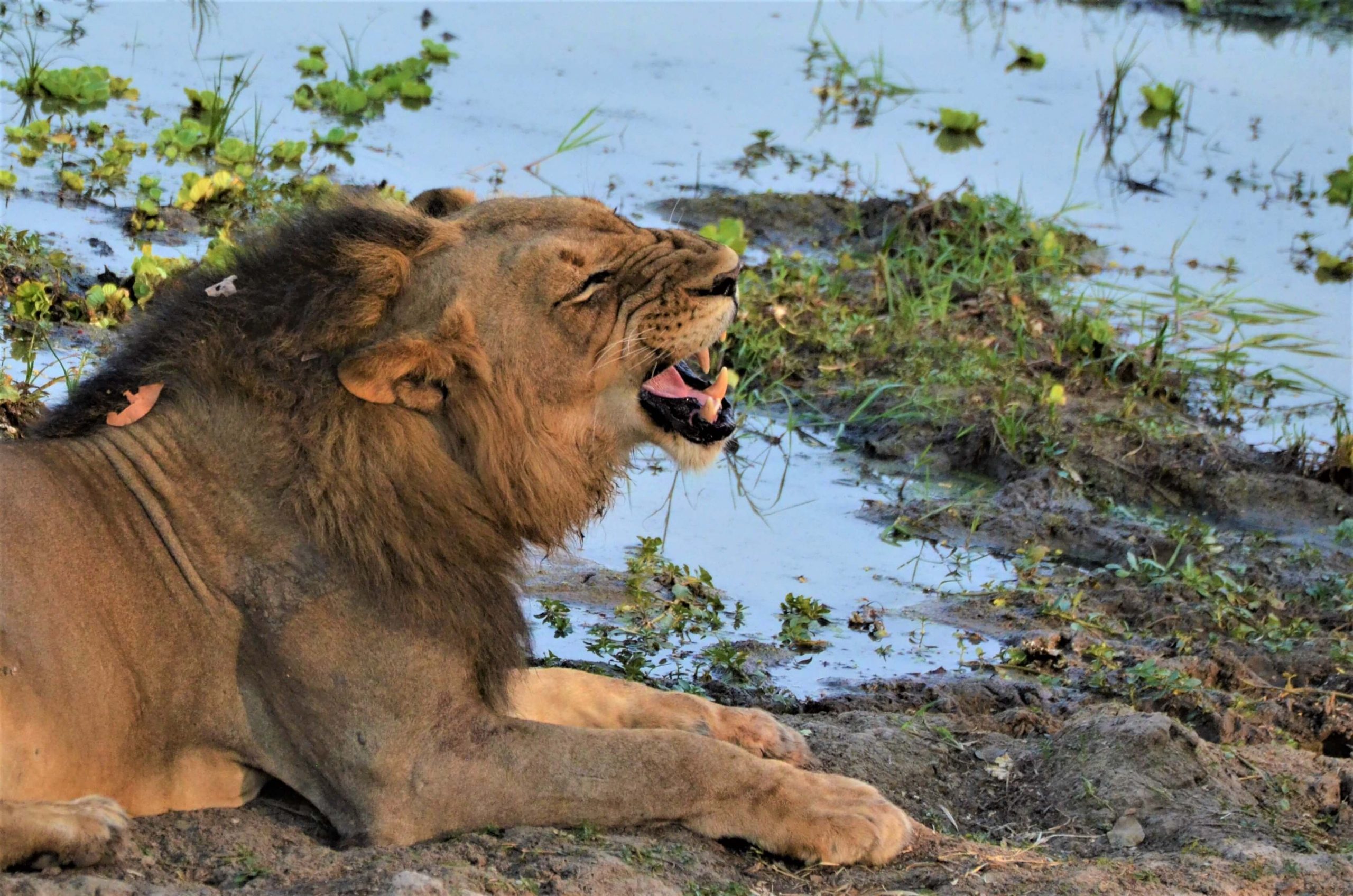 This young male seems to be laughing about his pranks

Dr Amanda Salb, the vet at the Wildlife Emergency Response Unit, told us they were driving through the bush early in the morning a few years ago. After some thermos coffee, they stopped for a quick bathroom break. Lions always stay close to their own pride and some wore collars, so the satellite tracking showed that they were all far away. The vet was the only lady in the group and decided against better judgment to go a little further from the vehicle. After all, all potentially dangerous animals were in completely different areas of the park. She didn’t have her pants down yet when she jumped up again from a growl right behind her. They turned out to be two adolescent lions, that should’ve stayed with their pride. However, these naughty teenagers had decided to go for a walk. Ever since, this vet and her colleagues have always stayed right next to the vehicle… As embarrassing as that may be, it’s better than getting into a fight with Simba! Are you looking forward to going on safari in Malawi?! Read more about the other reasons to travel to Malawi here

Which safari animal in Malawi would you like to read more about next time? We’d love to see it in the comments!