The black rhino is one of the most endangered mammals in the world. It is also one of the wildlife species that guarantees the most excitement when seen on safari in Africa. These powerful animals appeal to the imagination and if you are lucky enough to spot them, it’s something you won’t easily forget. Keep reading to learn more about black rhinos in Malawi and how this country plays a significant role in protecting this critically endangered species.

The black rhino (Diceros bicornis) is a critically endangered species. Fortunately, things seem to be going in the right direction. Several conservation projects focus on areas where black rhinos occur. In 1995 there were only 2410 in the wild and that has now increased to more than 5000. The species is not off the red list yet, but let’s be positive!

How could you kill such an impressive animal for its horns?

Black rhinos live up to 25 – 40 years old in the wild. They have a calf once every three years after an average gestation period of 16 months. They live solitary and are quite aggressive. So be careful if you find yourself on foot in a black rhino area. Especially because they can run up to 55 km/h!

Difference between black and white rhinos

Despite their name, black rhinos are not black. Like white rhinos (Ceratotherium simum), they are greyish in color. This is probably because of the first Dutch people who saw a white rhino in South Africa. They have very broad lips. When these people described the animal they had seen in English, there was confusion about the translation of “wide lip”. This became “white” instead of “wide”. Later a different kind of rhino was seen, with a much pointier lip. As opposed to white, this one was called black.

The difference in lips is due to the diet of both species. The white rhino, nowadays also called the square-lipped rhino, eats grass on the open plains, like a lawnmower. The black rhino, also known as the hook-lipped rhino, is better built to pick leaves and twigs from the bushes. In addition, white rhinos are larger than black ones and the smaller head of the black rhino is face more upwards. Because black rhinos live in thickets, they are much harder to spot than white rhinos on the open plains.

The difference between a white and black rhino

A few years ago, we saw something unique in South Africa on safari. Towards dusk we were at a waterhole, where a black rhino emerged from the bushes. After he had just started to drink, suddenly a white rhino arrived. There is always some tension between the larger white and the smaller, but more aggressive, black. Both rhinos stared at each other for minutes. Before it got too dark to take pictures, the white rhino decided to leave.

Within a minute, another black rhino arrived. These usually solitary animals started to niff each other and even seemed to kiss!

A few weeks later, in about the same location, we saw some interesting shapes in the far distance. This turned out to be a close encounter between a white rhino on the left and two black rhinos. We’ll never know if these were the same rhinos and we’ve never seen something like this again. People wouldn’t even believe us without the photos. Africa never gets boring!

Where in Malawi can you see black rhinos?

The famous Big 5 is advertised in many places in Africa. However, usually only the white rhino occurs there. Officially, it’s the black rhino in the Big 5. This puts Malawian parks in the special position of being one of the few places to have the real Big 5. In terms of vegetation and landscapes, black rhinos in Malawi should be doing very well.

They used to be common here, but sadly, nowadays you can only spot them in Liwonde National Park and Majete Wildlife Reserve. Unfortunately, they do not show themselves often. Especially not in the rainy season, when the vegetation is very dense. You have the best chance in the driest months of September to November. Especially keep an eye out for waterholes in the morning and late afternoon!

Black rhinos are hard to find in the dense bush

Due to rapidly improving nature conservation in Malawi, some wildlife species have slowly returning from Zambia to the north-west of the country in recent years. Unfortunately, black rhinos have almost completely disappeared in Malawi’s neighboring countries too. They could therefore only be re-introduced into Malawi with assistance.

Recovery of black rhinos in Malawi

Unfortunately we have no own photos of black rhino calves, but a white one is just as cute!

The last of the ”original” occurring black rhinos in Malawi was seen in the 1980’s. Fortunately, the governments of Malawi and South Africa started a collaboration in 1992. A year later a pair of black rhinos was moved from the South African Kruger National Park to Liwonde National Park in Malawi. A special Rhino Sanctuary was built for this. In this fenced off area, it was much easier to keep a close eye on the rhinos and protect them. And with success, because the first calf was born in 1996! It was decided to fence off an additional area within Liwonde National Park for another black rhino pair in 1998. In 1999, a second calf was born and the team expanded this project further. Other animal species also struggled to regrow their populations in Liwonde. So, buffalo, sable antelopes, eland antelopes and zebras were also released in the Rhino Sanctuaries. All these populations grew so well that in 2003 the first herds were released into Liwonde National Park itself, outside the Sanctuary areas.

In 2003, Malawi reached another important conservation milestone. That year the non-profit organization African Parks entered into a partnership with the Malawian government to take over the management of Majete Wildlife Reserve. This park was completely poached out due to famine in Malawi. The civil war a little further in Mozambique, meant the final blow for many wildlife species. At the time African Parks took charge, they worked hard to strengthen the fence and train rangers from the neighboring villages. This went so well that the first wildlife could be introduced that same year. Among others, two black rhinos were brought from Liwonde to Majete. Here too, they initially worked with a smaller, extra protected Sanctuary part. In 2008 this fence was finally removed, so that the wildlife could populate the entire park.

The population of black rhinos in Malawi grew steadily. It became increasingly important to ensure genetic diversity. November 2019 saw another international success for nature conservation in Malawi. As many as seventeen black rhinos were flown from South Africa to Liwonde National Park. In addition, to refresh bloodlines, two rhinos were brought from Liwonde to Majete and one from Majete to Liwonde.

Believe it or not, but airlifting is the quickest and safest way to move a rhino from where it was darted in the bush, to the trucks! Copyright: Wildlife ACT

For safety reasons, exact numbers of rhino are never published, but Malawi now has a fantastic healthy and diverse population of black rhinos. Not so long ago, this relatively small country was almost completely without wildlife. Malawi now put itself on the map when it comes to wildlife and nature conservation.

Due to the perfect living conditions for black rhinos, the hope is that many calves will be born here. Ultimately, these could then be relocated in order to strengthen populations of this critically endangered species in other African countries. 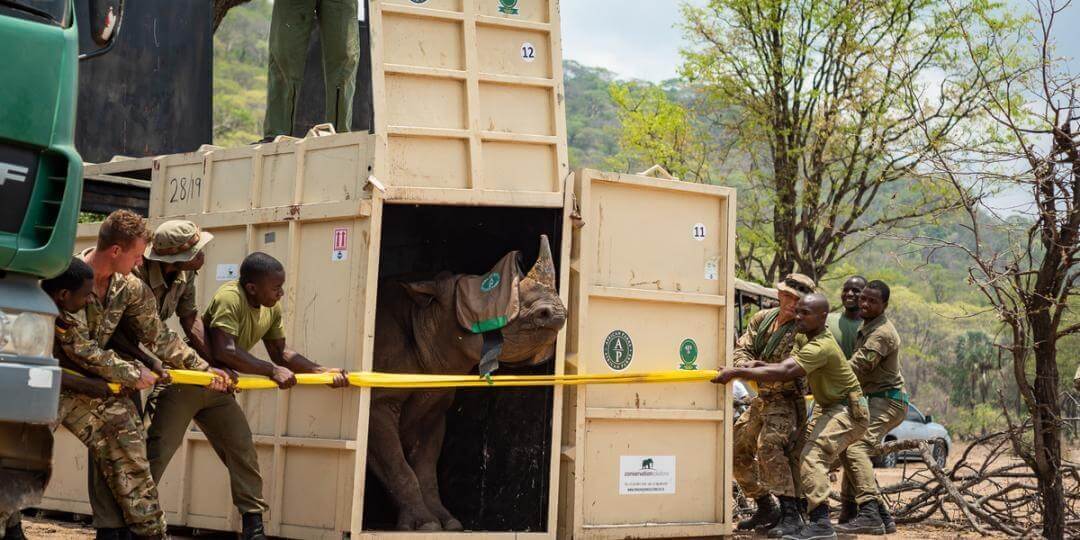 No less than four black rhino calves have been born in Liwonde National Park this past year. This makes Malawi one of the most significant countries in Africa to keep this species safe from extinction.

African Parks has published a six-minute video about the work they are doing with black rhinos in Malawi.

Our favorite African country has now fully proven to be a top safari destination! If you still need more convincing why Malawi should be high on your travel bucket list, you’re welcome to read this blog as well.